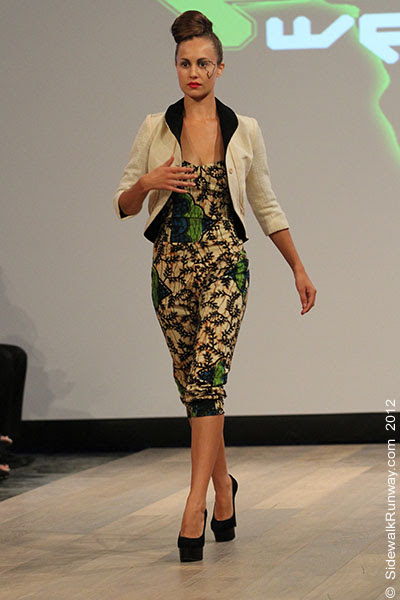 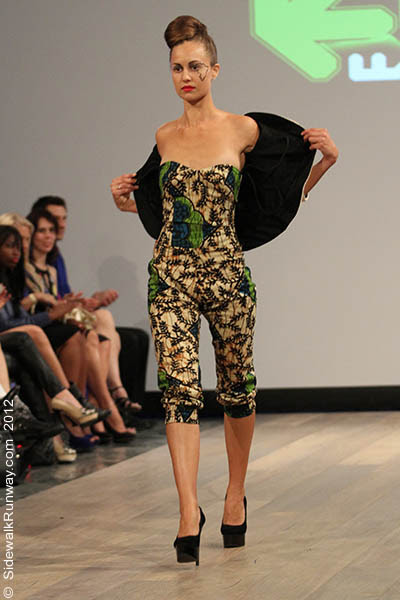 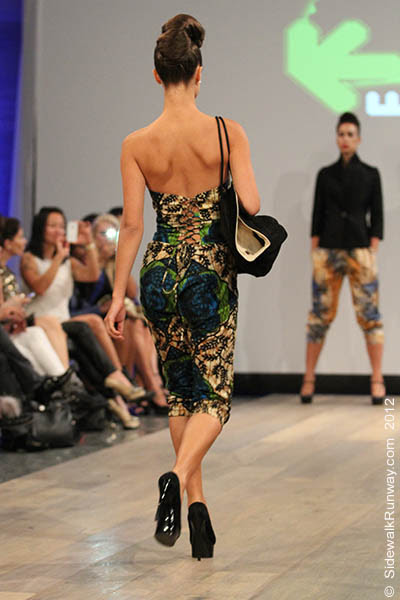 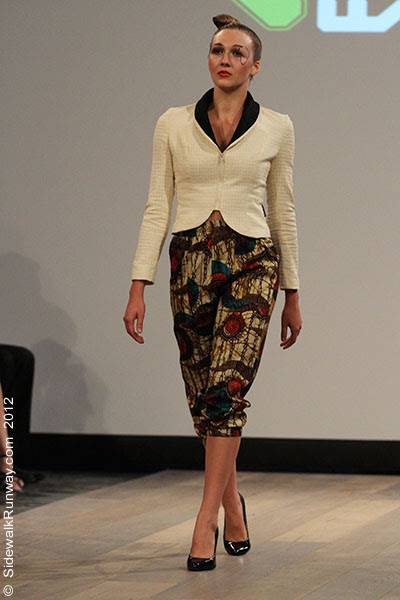 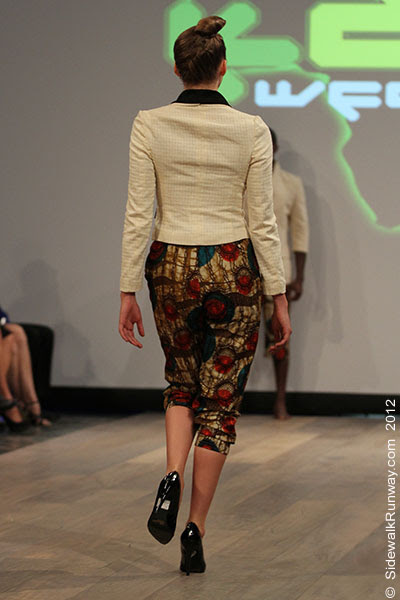 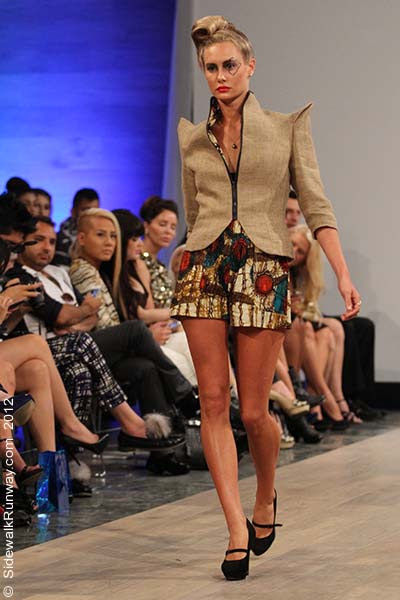 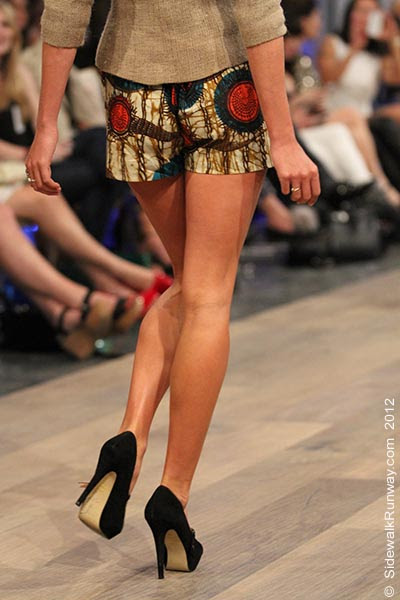 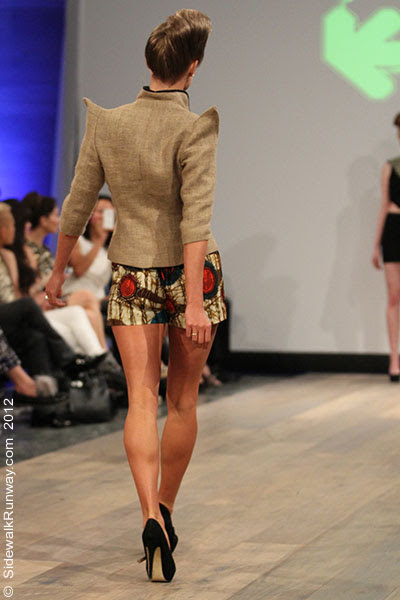 The designer is from the African country of Uganda. This was his first visit to Canada. What an impressive debut! The audience was “wow-ed” with first three images which shows a model taking off her jacket, folding it inwards and slinging it over her shoulder like a purse. It was an elegant solution for warm afternoons and cool evenings.
http://www.sidewalkrunway.com/2012/09/kas-wear-collection-highlights-vancouver-fashion-week-ss-2013/
Posted by STREET 256 at 1:42 PM No comments:

Mario Szabo
For those that attended Thursday night’s Charles Kasozi’s (Uganda) Kas Wear show during Vancouver Fashion Week, the charismatic designer shared an unexpected twist to office attire. With bold prints and customizable clothing, it seems as though the young man introduced upscale to bohemian chic, or vice versa. Inspiration was derived from the current economic situation in Uganda, which became apparent as business wear tended to be the majority of the collection. Nonetheless, beautiful African and Ugandan prints brought liveliness to the collection, which was anything but drab.
A few note-worthy pieces were showcased in the beginning of the show; right from the start we laid our eyes on the lovely model in a cream blazer and printed onsie. Halfway through, she started undressing to eventually hang the inversed coat on her shoulder. This ability may have been an alternative to coat-check. Another customizable piece was worn by a man, who zipped off a middle section to his army coat, turning it into a blazer-inspired top. This transformative collection was connected quite evidently with the outline of Africa on the left eye of each model, sometimes seen on a few pieces themselves.
Thank you to UJAMAAH for sponsoring Mr. Kasozi so that he may showcase his brilliant collection to the city of Vancouver. With such great talent around the world, it was an honour to attend this display of international creativity. For those that would like to see the entire collection, search Kas Wear on facebook.

Mario Szabo is a street style photographer in Vancouver. After completing 3 years in pre-medicine at the University of Victoria, Mario decided to change paths and venture into two of his life’s passions: photography and fashion. Merging the two, he created Victoria Fashion Scene to showcase the many fashions and personalities in the city. After his move over to Vancouver, he is looking forward to cultivating an exciting fashion hub for the community.
Posted by STREET 256 at 1:41 PM No comments:

On the second day of Vancouver Fashion Week, there was one designer who stood out from the crowd, and that was Uganda’s Ras Kasozi. His Kas Wear line was the closing show on Thursday night; it was worth the wait. The self-taught designer grew up in Kampala and was inspired to design by his tailor mother and a copy of Vogue he obtained as a teenager. His collection was heavily influenced by his home country where people can’t always afford high-end fashions, something that inspired his transformable outwear (we’re talking reversible jackets and coats that fold up into chic purses). The collection was a hit with the VFW crowd, and I dare say Kasozi can count his first showing outside Africa as a resounding success.
As usual, biiiiig thanks to Peter Jensen for the amazing photos. 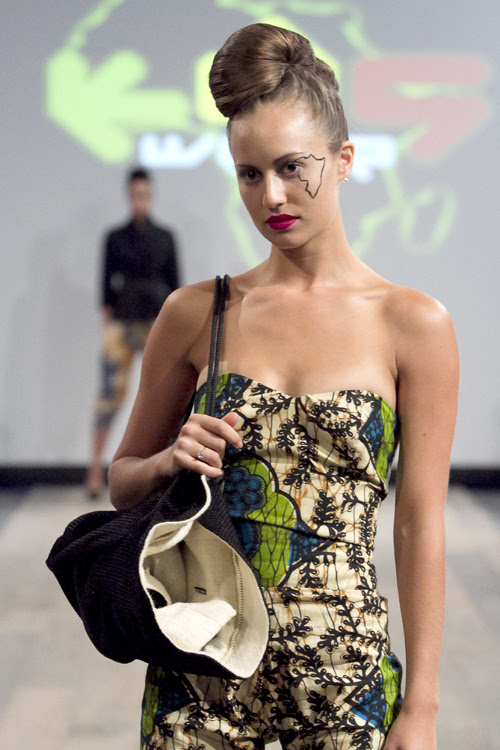 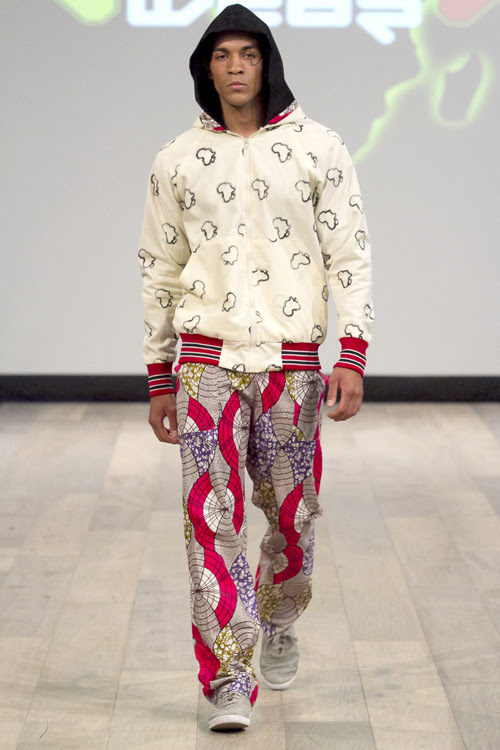 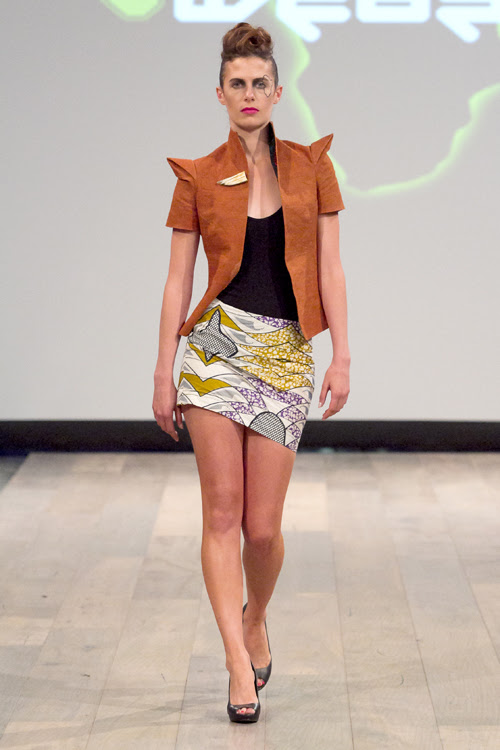 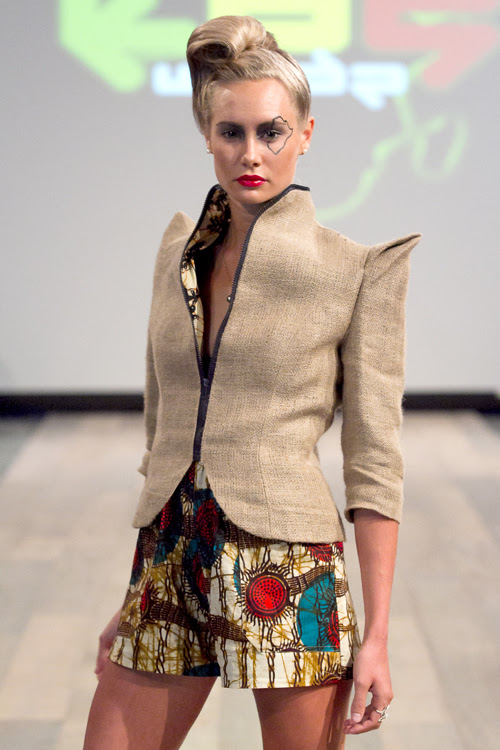 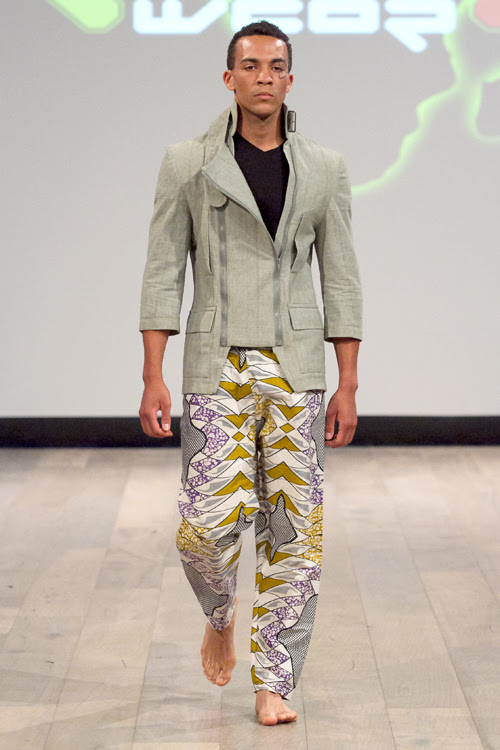 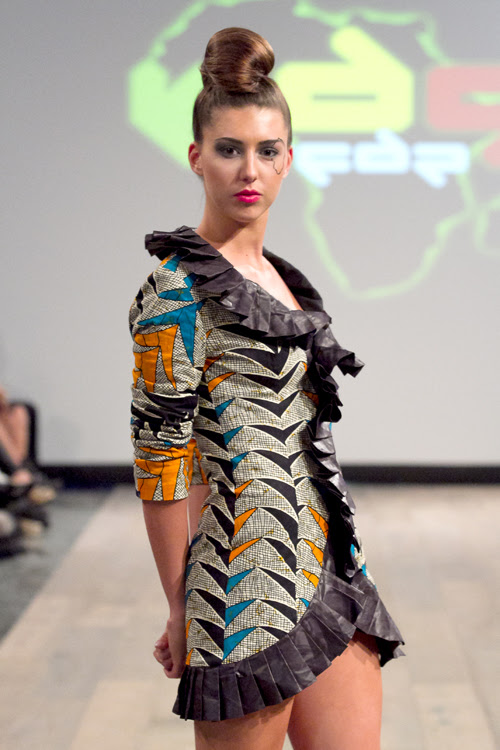 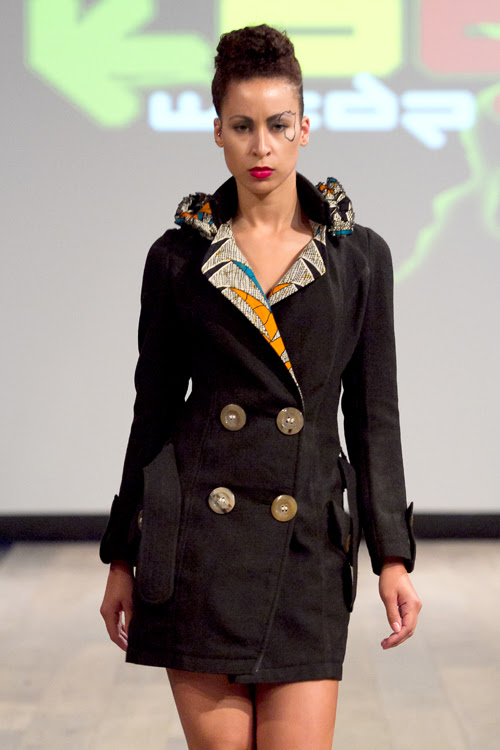 All images copyright Peter Jensen Photography.
Oh, by the way…Kasozi is represented in North America by The Five Agency. Click here for our interview with The Five Agency CEO Justin Voitic!
There’s just one more day of Vancouver Fashion Week to go, but we’ve got lots more to share with you!
Much love, Madison Blake
Posted by STREET 256 at 1:33 PM No comments:

By: Dawn Archer
I want to introduce Ras Kasozi. He has a fashion line, Kas Wear, that showed at Vancouver Fashion Week on Thursday Sept. 20th, 2012. His Urban Indigenous line embraces his African heritage (he is from Uganda) and Western classics.

Kasozi claims they are walking pieces of art. I agree!
The clothing was thoughtfully designed and well constructed. Kasozi thought of everything, he even had a blazer that turned inside out into a handbag! He said, "back home, we have to be creative with what we have."
I was delighted, entertained and impressed. Most of all, I would wear any one of these pieces.
Best of luck to you Ras Kasozi.
Bravo!
http://www.hushmagazine.ca/dawn's+street+cred-+kas+wear+at+vfw/blog/377/8/ 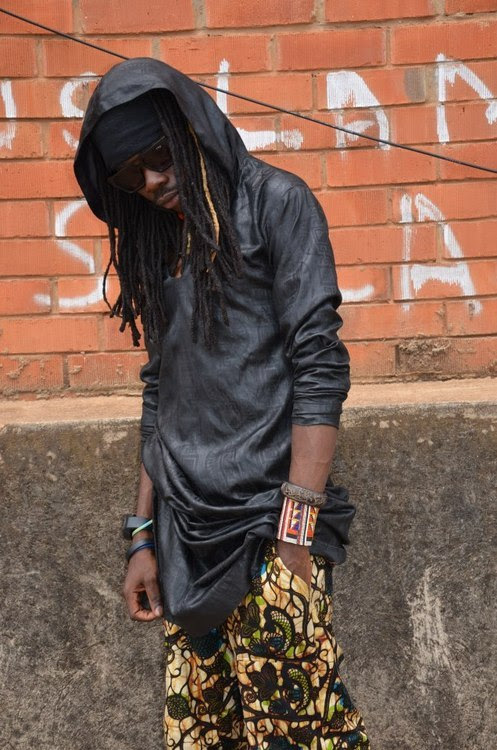 778 885 8365 FREE end_of_the_skype_highlighting
Email: info@thefiveagency.ca
July 30th, 2012
FOR IMMEDIATE RELEASE
THE FIVE AGENCY INTRODUCES KAS WEAR
A movement of rising together through celebrating each person’s uniqueness
Vancouver, BC. July 30th 2012 - The FIVE Agency & Ujamaah are inviting you to the first ever Global debut of the African fashion designer Kasozi’s Kas Wear collection on the runway at Vancouver Fashion Week S/S 2013 September 20, 2012 at 7:00pm
The FIVE Agency in partnership with Ujamaah is introducing Bavubuka Dynasty’s Kas Wear as his North American representative. The FIVE Agency is a collective of some of Vancouver’s top creatives with a unique mission: to create, promote and sustain an arts community that looks beyond itself, and gives back. Operating under founder and CEO Justin Voitic, the FIVE Agency is bringing a new shared consciousness to the multicultural city of Vancouver.
Founder of the Bavubuka Foundation, African Diaspora Hip Hop legend Silas Balabyekkubo joined forces with Patti Desante, former broker in the oil and gas industry turned Buddhist Chaplain to create Ujamaah Collaborations. Ujamaah’s Campaign 1110 activates and integrates people around the globe to collectively engage through a shared passion grounded in the entrepreneurial spirit to create prosperity for all. As a social enterprise, Ujamaah is dedicated to the growth of creative capital as an antidote to the, “Mindset of Poverty”. Ujamaah is currently engaged in a pilot project to create a DreamSpace in Jinja, Eastern Uganda. This prototype building will serve as a focal point for a more secure future for the community through the empowerment of its youth.
“My socio-economic well being depends on your socio-economic well being”
Patti, Silas, & FIVE will be introducing you to a designer in Uganda who has created Kas Wear - this young man (Kasozi) once saw as a child a Vogue magazine, one not available to him in his village but was completely captivated by the fashion he saw. Through the assistance of the Bavubuka Dynasty, this self taught designer created amazing couture enabling him to live his dream and now via Ujamaah and The FIVE Agency he will have the unique opportunity to show his talents to the world. Together, we have set the stage to be Vancouver Fashion Week, where a comprehensive tone, mood and elevated theme will be present next Season S/S 2013 (September 18th-23rd, 2012).
One where the designers who will share their art with us will tell their unique stories, of who motivated, inspired, & supported them, and why they are doing what they love to do!
“Imagine what the world would look like
if we were ALL doing what we love” - Patti Desante
This season will be the “Olympics of Fashion” and carrying the spirit true to Vancouver The FIVE Agency is honoured to produce Bavubuka Dynasty’s Kas Wear show & together with all of you we as a community will enhance the experience of Vancouver Fashion Week by manifesting everyone involved to carry forward the message of empowering and encouraging each other!
The FIVE Agency & Ujamaah have teamed up with Echo Cloud Entertainment to begin production of a Reality Documentary Series following the stories of Kasozi and all involved in his journey as he leaves the village for the first time to debut his 24 look collection on the runway of Vancouver Fashion Week on September 20th, where we will bring the spirit of Africa to true liberation!
Important dates to save:
September 20th, 2012- The Kas Wear Show produced by The FIVE Agency at 7:00pm
September 22nd, 2012 - The Official Vancouver Fashion Week After Party presented by The FIVE Agency ft. Artists, MC’s & Musicians from Africa.
###
http://thefiveagency.tumblr.com/post/28399622816/kas-wear-press-release
Posted by STREET 256 at 1:22 PM No comments:

Kas Wear is proud to be show casing on the 9th annual Uganda hip hop summit that will take place on 26th December 2011.
Come and see the Hip hop cloth line Kas Wear will put forthe on that day practising on the hip hop element of "Hip Hop Fashion"
your all invited.
The Uganda HipHop Foundation & Bavubuka Foundation, recognize the power of Hip-Hop music and culture to catalyze positive social change. Hip-Hop is modern youth’s cultural foundation, and symbolizes the ability of people living in marginalized communities to flourish and live their dreams. With the vision of creating a peace building platform that empowers and unifies young people from diverse communities, we continue to create a voice for the youth in Uganda.

The Hip Hop Summit has been an on-going event for the last seven years. The main aim of the summit is promote the hip hop culture in Uganda by empowering the youth and creating positive awareness through music and culture. The Hip Hop Summit is targeted to the youth crowd mainly students aged 18-25 years old. It features live performances by local and international Uganda’s top urban artists from the Hip Hop and R&B genres. The Hip Hop summit is not just about The Concert. During the day time there is a series forums and workshops that are carried out by Uganda's top Hip Hop icons and role models. The summit touches other areas of Hip Hop culture by featuring a DJ scratching demonstration, a B-Boy dance battle, a Graffiti art display, a Motivation speakers, and a Hip Hop Fashion Show.

Favorite Quotations:
"There is a self Liberating truth in celebrating the indigenous in you". THE BEAUTIFUL SPIRIT OF THE SUMMIT THIS YEAR WILL BE BLESSED BY APPEARANCES FROM:

THE HIP HOP SUMMIT CYPHER (FOR ALL EMCEES)

MANY MORE PARTICIPANTS ARE STILL BEING CONFIRMED WE WILL KEEP UPDATING THE LIST AS WE COUNT DOWN TO THIS UGANDA HIP HOP CELEBRATION OF THE LONGEST RUNNING HIP HOP EVENT IN UGANDA.

WE ARE LOOKING FORWARD TO ALL THE FAN ARTISTS FAMILY AND FRIENDS OF THE HIP HOP COMMUNITY COMING OUT TO BUILD SO WE CAN GROW HIP HOP IN OUT COMMUNITIES IN UNITY.....
Posted by STREET 256 at 3:59 PM 1 comment:

kas wear with anna- clare lukoma invite u to the fashion show at club silk December 8th 2011 come and celebrate the authentic essence of Africa beauty in all shapes, size and shades. clothes for today's conscious fashionista!
with surprise performances from Antonio and Philip of tabu flo

First 5 RSVP will receive complimentary tickets
See you there.
Posted by STREET 256 at 11:13 AM No comments:


We would like to thank Family and friends from Canada who have taken time out to share our outfits to the rest of the world.
We would like to thank brother Silas Babaluku the founder of Bavubuka FOundation for continued support.
Written by:
Bwette Daniel
Kas Wear Photographer
Posted by STREET 256 at 7:13 PM 1 comment:

Promote Your Page Too